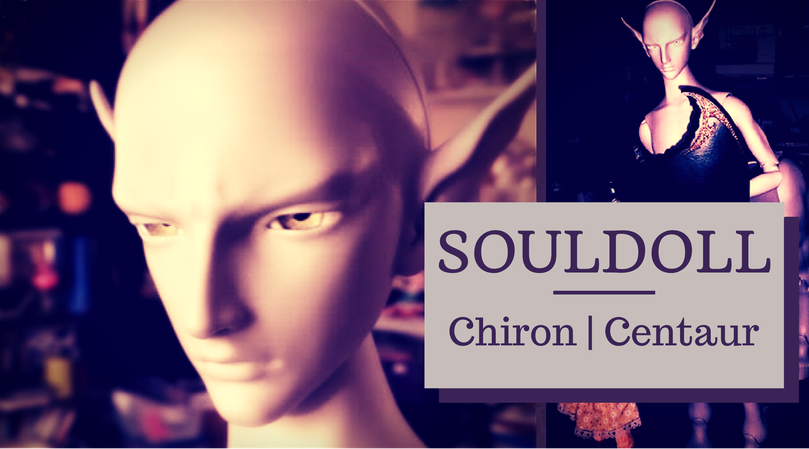 When Souldoll released their Chiron centaur back in 2009, I just knew I had to get one! He was amazing!

In January 2010, I took the plunge and ordered him in gray skin, with elf ears, and included the Souldoll painted sword and shield. Unfortunately, I had missed out on being able to order his fullset outfit, but no matter – he was epic! <3

Aaand then he was delivered.

The box was HUGE!

Seriously. The box he was delivered in was bigger than our coffee table (notice the can of Dr. Pepper for scale). o.O

His actual doll box literally fits right inside of the shipping box he came in. There was no additional space between them. And the amount of padding/pillows/foam/bubble wrap inside the doll box was insane – and totally necessary!

His elf ears were so gorgeous – I was terrified I was going to break one.

Check them out! Talk about epic elf ears.. <3

I took a couple pictures of size comparison between him and a Volks YoSD (shown with PeapodDoll Hooves), and the size of his hands compared to the older single jointed body from SoulDoll (my SoulDoll Paris). The size difference is CRAZY!

Seriously, though, he was just so huge I couldn’t keep him. My husband and I were living in a 1-bedroom apartment at the time, and we just didn’t have space to keep him.

But he was so cool! And detailed! The detailing in the sculpting was amazing. Truly a work of art.

Luckily enough, I was able to sell him to a friend, so he is still in the area. <3

I loved him, but I’m not sure I would order him again… Maybe a Yo-size or PKF-size centaur might be a better fit for me…

This site uses Akismet to reduce spam. Learn how your comment data is processed.